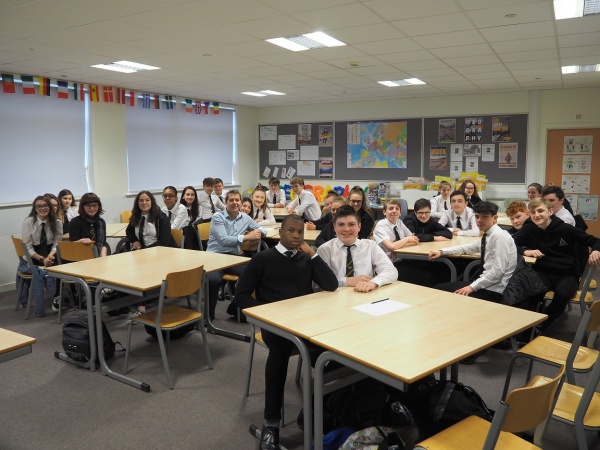 Professor Iain Stewart, BBC Presenter and Professor of Geoscience Communication at Plymouth University, gave an engaging and inspiring talk to our N4/5 S4 Geography pupils on Tuesday 6th March. Pupils listened intently, and were at points on the edge of their seats, while he talked them through issues including the Indian Ocean earthquake and tsunami in 2004 and the possibility of a major earthquake hitting Istanbul in the future. Pupils asked probing questions where he revealed his favourite place to visit and gave a graphic account of the most destructive natural disaster he had seen. Pupils were impressed by his experiences and were eager to ask what pathways they could take to do something like this in the future themselves.

“I found the talk very interesting, as I enjoyed hearing about how people affect the severity of natural disasters. The cases discussed were different from what we learned about in class which made the talk more engaging. I liked that we had the opportunity to ask questions about his own experiences and opinions, and that we were able to discuss questions in groups before asking them. It has made me more interested in the topic of natural disasters, because it made me more aware of what people can do to prevent the aftermath of these from being so extreme. The talk also introduced me to the idea of doing something in that area in the future, which I hadn’t thought about before.” – Alisa Smith

“I really enjoyed the talk that Professor Iain Stewart gave. It was very engaging and interesting. It gave me a greater understanding of what a natural disaster is and the reality of one when it strikes. It showed that not all of them do much harm but some can cause massive destruction. I also liked the talk that he gave us because he described the difference between geography and geology which I wasn’t sure of before. I thought it was good as he described his experience and knowledge of natural disasters and how they affect the world around us.”  – Mia Arnott

Aug 26, 2020 Mrs McGrath
We use cookies to ensure that we give you the best experience on our website. If you continue to use this site we will assume that you are happy with it.Ok