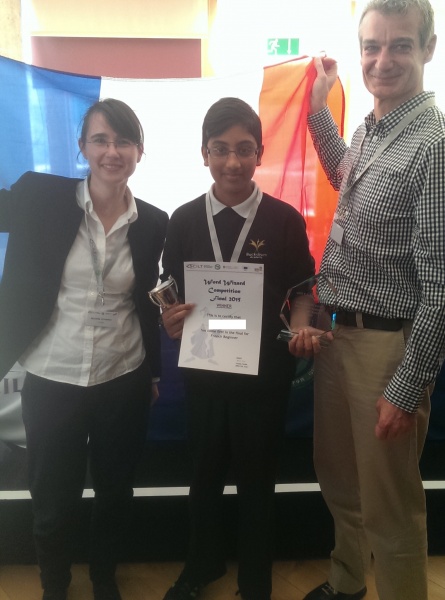 The Word Wizard Competition is aimed at encouraging S1- S3 pupils, studying French, German, Spanish, Mandarin and Gaelic, to learn vocabulary, and have fun at the same time.

Pupils were given 225 words to learn throughout the year.  They had to learn the pronunciation of the word along with the article if present and spell the word with any accents or grammar in the target language. By the time of the National Final in May 2015, competitors were tested on a random selection from all 225 words.

Bucksburn Academy was represented by 2 S3 pupils who performed extremely well in the semi-final at the University of Strathclyde at the end of May, with one of the boys managing to make it through to being one of 5 finalists in the French Beginner category at the Scottish Parliament on the 29th of May 2015.

Despite stiff competition from other schools, his hard work paid off and he won 1st prize in the French Beginner Category. Congratulations!