For the third consecutive year, Bucksburn Academy will be taking students from S1-S3 to Folgaria, Italy.  Individuals will blog their experiences of the week here.

On the artificial snow of the Italian mountains we all set off on our first day of skiing. We arrived at 10pm yesterday evening after a long day of travelling, and as all of us dragged ourselves into the rooms to get a good night sleep for the next day.

We woke up at 7 the next morning for breakfast and then finally got kitted out for skiing at 10.

Lauren-When we arrived at the slopes we were split into groups according to our ability, it was really difficult for me because I’ve never skied before and I have learnt many skills now and I feel like a pro, there are so many steep slopes and looked scary. I also learnt that it’s very important to eat breakfast while doing a sport because I almost fainted because I hadn’t eaten breakfast but after lunch it was a lot better – I really enjoyed myself.

Ché- There was a nice juxtaposition with the weather today as it was a sunny day with a clear sky but it was absolutely freezing. My legs hurt due to the skiing and I was reduced to not being able to walk twice but it’s all good I’m fine now as I can walk. The girls (there is seven of us) went then to the shop and bought things, we didn’t bring the boys but we will show them where it is tomorrow. I am currently writing this in the lounge/social area room, we have supper soon.

Laura- It was so nice to be skiing again because I haven’t been in over a year. I was put into the top group and for our first day we went down some pretty steep bits, but the views counteracted the pain and tiredness. I started off skiing with the instructor Fabio and he took me last year as well but then in the afternoon he had to teach some little children so we had a girl called Roberta and she was so nice! I am now waiting for my tea and some down time. 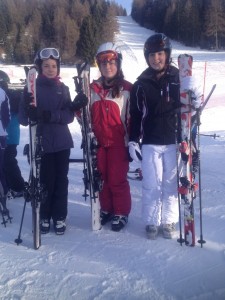 Luke A- Today I learned a new trick called a parallel turn but I can only do it when I am going slow or I will fall over. I went on a chair lift for my first time in my life – I loved it. When we got to the top we had to line up so our instructor Renzo could talk to us about how to help us down the mountain after he is finished talking to us Renzo would take us up the magic carpet then we would have a practice before going down. When we were going down the mountain I fell about 5 times but it was really fun.

William- This morning the beginners group (the group I’m in) went on the chair lift for the first time which was scary the first time but then it got better. We skied down the mountain three times today – it was amazing, Mrs Leslie asked me “what would I rate today and what was my favourite part of today” I said 10 out of 10 and my favourite part was the chair lift. I’m really looking forward for the rest of the week for all my fails. 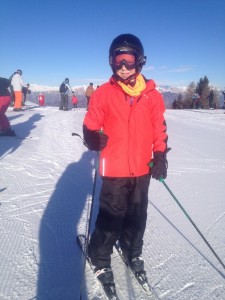 Euan – Today we started by going up the ski lift (after I had climbed up the hill unsuccessfully) and we went into the forest. We were practising the parallel turn and we also did slaloms. For lunch we went back up to the ski area and ate outside. It was really cool. After lunch my group went to the ski park, which was quite far away. After that we came back and did a 2 mile run back down to the hotel.

Lewis T- Today got off to a brilliant start with someone taking my boot by accident, but it was quickly sorted out by the staff and we got onto the slopes. As we do every day, we started by going up the ski lift, then we went to the same forest as the other groups. We were skiing in that area for the majority of the day. We went out to a local Pizzeria for our tea, which was really good. We got a group photo then walked back to the hotel. 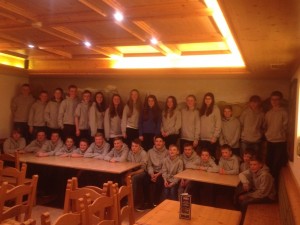 Amy D – Today I never fell off my skis once but I thought I was going to when we went down a black slope (which is the hardest). My ski instructor wanted me to go faster so he made me go in front of every one and everyone was annoyed at me because I was still going really slow. At the start of the first session we went on the chair lift up to were we go every day but when I was on the chair lift it stopped because someone in front of me struggled to get on but I was really scared because I thought it was going to fall. After we finished the first 2 hours we stopped to have our lunch and we had lasagne which was quite nice, we then went back out for another 2 hours. Our group did really well because we went down loads of hills and we still made it back in time. We then went into the boot room and we left our boots to dry on the rack so they are are all warm and cosy for tomorrow.

Scott N- Today the slopes were very smooth, it started snowing early in the morning and throughout the day. I never fell of my skis today but I was once very un-balanced and close to falling. Near lunch time my group (middle group) were skiing through a cloud down a hill back to the hotel. When we went back out after lunch my ski instructor let us ski down a black run, it was very steep but really cool. We went down hills, through trees and over bridges today was really good. I hope it will be the same tomorrow! 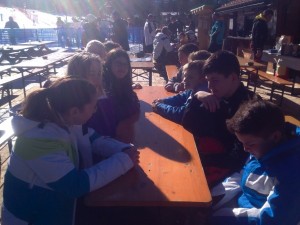 Today we went on a 5 hour journey to Fiorentini. We spent 2 hours skiing to get to our destination. After this we stopped for an hour to have lunch. I had hamburger and chips and Reece had pasta. After we had finished our lunch we went back out on the slopes. First of all we had a shot of the slalom race in preparation for tomorrows race. We then made our way back to our hotel. When we had finished our skiing we got some sandwiches at the hotel for a snack before we prepared for our bus journey to Folgaria. When we arrived in Folgaria some of us went ice skating and some people went to play football. We both decided to play football. The bus journey to Folgaria didn’t take long and the views were amazing.

This morning, it was snowing so much that you couldn’t see a thing, but we managed to go skiing for 2 hours. Then after lunch the weather got worse but we still went skiing to do a race and struggled to come back through the deep snow. After everything that happened INCLUDING the race we all came to the lounge and we all sat down. Our Award Ceremony could begin! Our instructors came and they handed out medals and certificates from the race. Some people didn’t do the race but were happy that they got something too! Then it was time to get certificates from the teachers. They were very funny because everyone got a nickname for what they did through out the week. For example I had ‘Miss Elegant’ for skiing neatly and I had a great attitude even though I had crutches. Lana was MY ‘Nurse Pottinger’ because she cared for me when I had a really sore foot, and she had a great attitude same as me!

After some fun, we got into two lines and sang our own version of ‘500 hundred miles’ by the Proclaimers. After we all nearly left the teachers gave some gifts to the staff to say thank you. When we all came to our rooms, we packed our suitcases and took them down. Now me and Lana are tired and cant wait to get a “great” sleep!!