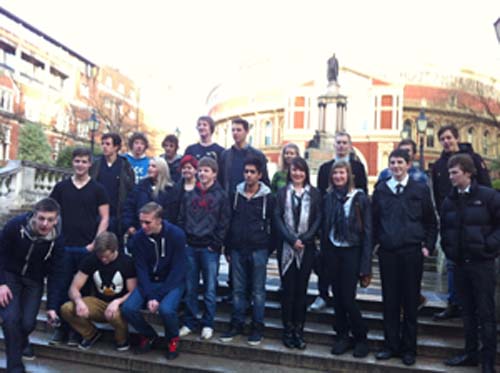 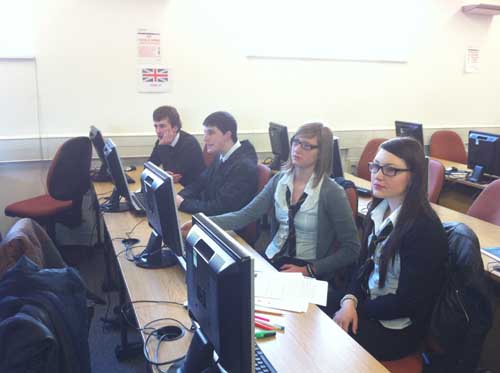 As four S6 pupils from Bucksburn Academy we were overjoyed to be given the opportunity to represent the United Kingdom in the Petrochallenge International Finals in London during the weekend of 25-27 January 2013.

We took part in the first round of the competition back in June 2012 and competed against 43 Secondary Schools from across Aberdeen City and Shire.

The competition comprised of a 2 day challenge event which was a simulation based on the oil and gas sector.  Our simulated challenge was to locate the best plots to drill for oil, trying to gain as many creditability points as possible.  Once we had been given our plots and we had extracted all the available oil we had the option to sell and then locate a new plot for drilling.  We had to negotiate deals with pupils from the other schools trying to invest in any plots they had which seemed financially sound and would increase our profit levels.    This section of the competition was known as the “licensing rounds”.  This was really good fun as it enabled us to communicate with pupils from other schools and try to use our negotiating skills to gain an advantage over them.  By the time we got to almost the end of the second day of the competition we remained just outside the top ten position however, to our complete amazement we managed to turn things round during the last licensing round and jumped into first place with the highest profit level.  We had a very tense wait for the next 45 minutes until drilling closed and all we could do was sit and watch the other teams frantically try to knock us off the top spot.  During the last 15 minutes of the competition the score board was switched off to keep the winners in suspense.  To our delight we were announced the Petrochallenge winners for the North East of Scotland.  Another two competitions took place in the Highlands and Central belt and we were crowned the overall winners of the Scottish heats in November 2012.  We got a phone call in the December saying that we were the overall winners for the United Kingdom and had secured a place in the International Finals at Imperial College in London in January 2013.  This was a huge achievement and something which our teacher (Miss Simpson) and the whole school were extremely proud of.

We had won an all expenses paid trip to London “a once in a lifetime opportunity”, allowing us to become ambassadors for our school and local community.  We couldn’t wait to get there!!!

We eventually left Aberdeen Airport of Friday 25 January 2013 after a 4 hour delay due to extreme weather conditions.  After a very shaky start to the day our adventure had begun and this was something we were really going to make the most of – after all it’s not often you get a free trip to London, the chance to compete in an International Competition and the opportunity to visit lots of very interesting landmarks and do some shopping!

When we arrived at our hotel in Kensington, the competition facilitators met us and informed us that our profit margin was the largest out of all the competing teams from across the globe and this accumulated to just over 1000 teams.  Once again we were amazed at just how well we had performed in the first round of the competition.

We spent the Friday evening touring round central London and visited Harrods (where we all managed to purchase some souvenirs and presents for ourselves and our families).  The Saturday was devoted to the competition itself and we headed off to Imperial College with the other winning teams from Canada, Denmark, Norway, Iceland, Faroe Islands and Greenland.  We were given a tour of the University before the competition began and this was very interesting.  The weekend’s activities had been planned to provide an opportunity to come together as an International Delegation to find the International Petrochallenge winning team for 2012.  As the teams were brought together the level of excitement and tension increased in anticipation of who the ultimate winning team would be.

The competition itself lasted for 5 ½ hours, allowing for tough negotiations to take place.  Our team was never below 4th place and we did manage at one stage to reach second place but this was short lived.  By the end of trading we had secured third place.  This is something we are immensely proud of as it is highly unlikely that we will ever be ranked third in the world again at such an esteemed competition.  After the competition we unwound by visiting the British Science Museum with Miss Simpson and then did some shopping.  In the evening the teams were treated to a celebration dinner in the heart of Chinatown for all our hard work.

On the final day of our trip we decided to make the most of the glorious sunshine and see the sights that London had to offer.  We took the tube to Westminster and saw the Houses of Parliament, Big Ben and the London Eye and then walked down to Buckingham Palace.  We finished off our day shopping in Oxford Street.

We are incredibly proud of our achievements and are extremely grateful to the competition organisers for allowing us to participate in the 10th International Finals of Petrochallenge.