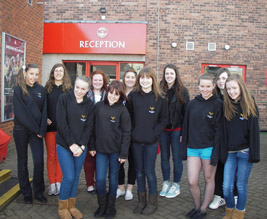 A group of pupils invovled in Rock Challenge 2013 went to Aberdeen Footbal Club to collect money at the Aberdeen v Motherwell game. They raised a fanastic £329.77! A great start to our fundraising for this year’s event in February.

Tweets by @BucksburnAcad
We use cookies to ensure that we give you the best experience on our website. If you continue to use this site we will assume that you are happy with it.Ok