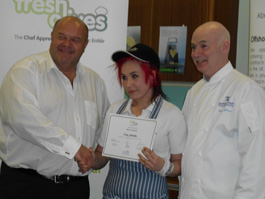 A Bucksburn Academy pupil has won the final of the second Fresh Olives Apprenticeship competition which took place at Aberdeen Grammar School.

The competition, which is backed by the Scottish government’s business to education programme and is the first of it’s kind in Scotland, was designed by local catering services and facilities management company Entiér.

Entiér launched the Fresh Olives apprenticeship awards in 2010 aimed at 4th year school leavers interested in a career in the catering industry. Managing Director of Entiér, Peter Bruce commented “With the dramatic demise in traditional apprenticeship schemes Entiér felt that it was important to create something quite unique that would be inspirational and achievable for young people in the region. Fresh Olives marks the first rung onto a credible career path in the catering and services industry and offers three winners a three year paid apprenticeship with the opportunity for a full-time job offer thereafter. 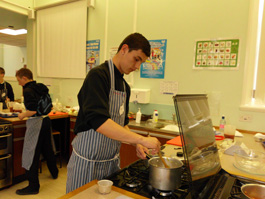 Over the last six months the competition has attracted more than 135 aspiring hospitality and events managers and cooks from six Aberdeen state schools. The pupils, all aged 15-16 have participated in a series of set tasks and practical assignments, all of which were developed and aligned to the national school syllabus by Entiér’s executive chef Mark Donovan.

Mark together with Managing Director Peter Bruce and independent judge George McIvor, a fellow member of the Master Chefs of Great Britain, judged the pupils throughout and had a very difficult task determining the overall winners from the 10 finalists, who participated in a two hour cook off, as the standard of talent was so high.

Peter Bruce added “I am looking forward to the Fresh Olives winners joining our business.  Whilst we may only be just over three years old we now have a dynamic and growing workforce of over 400. As an award winning business we have great ambitions and to meet these we have to ensure we recruit the best people. The Fresh Olives apprenticeship awards have proved to be most successful in finding young talent. Last year’s winners Rebekka Cormack and Danielle Ritchie have almost completed their first year’s training with us and Rebekka has been entered into Grampian Seafood Chef of the Year”.