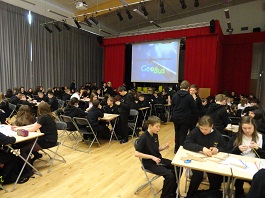 The event also compliments our current Comenius project (Re-Thinking Energy) for which more details can be found here.

Pupils were placed in house groupings and were challenged to come up with catchy company names and assigned each other roles in their companies including Designer, Director and Finance Officer. Working to a budget of £10 million, pupils were then asked to develop an efficient and cost effective wind farm. Pupils then considered designs for their wind turbine blades, sketched these out and placed orders for the materials they would need to construct them. 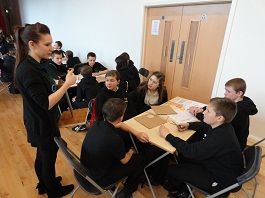 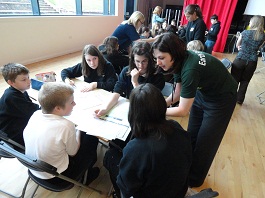 After break pupils then had to create their turbine blades, some pupils realising that perhaps spending some of their budget on scissors or glue might have been useful, but some managed to persevere by coming up with alternative methods of 'cutting' the card as they didn't want to blow their budget!

In the afternoon session pupils considered locations where their wind farm could be placed around Dufftown, detailing pros and cons for each site. Finally, pupils were given the opportunity to test out their turbines themselves. Would they work? Would they produce a lot of power? Would they just fall apart? In fact, the winning group of pupils managed to make the highest producing turbine blades the Geobus team have ever seen, producing 24volts of power – well done! 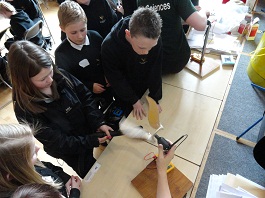 The top teams on the day were: