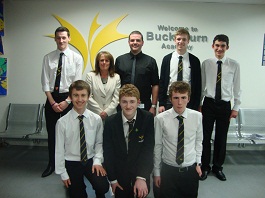 On 27 March, 134 people gathered to hear six pupils and four adult speakers deliver talks and networking sessions about the need to Re-think Energy. As the country moves away from carbon based fuels to renewable forms of energy, there is much to do to bring about the Scottish Government’s ambitious target of 100% renewables by 2050.

Bucksburn Academy hopes to lead a Comenius project with schools and colleges from Germany, Norway, Sweden and The Netherlands and are also working in partnership with Arbroath High, the final UK partner in the project. The Re-thinking Energy Project will, if approved by the North Sea Commission in July, start in August 2012 and last until June 2014.

The Re-thinking Energy Conference was hosted by pupils in the Re-thinking Energy Team. These were David Adams, Ewan Bremner, Ryan Cadenhead, Stuart Close, Alex Christides and Ross Yule. The final member of the team, Charlie Innes missed the event due to a broken leg. The young people had drawn up a delegate list from industry, education, environmental groups, community and local government for the event. With a hall full of expertise and ambition, the event began. 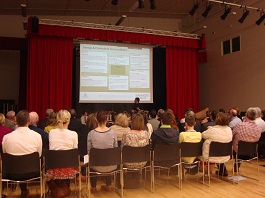 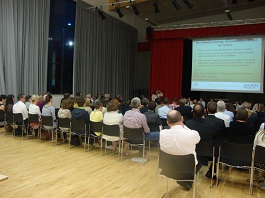 Mr Dave McGrath, Managing Director of Richard Irvine Renewables then outlined what Re-thinking Energy meant for the business sector and for parents.

Pupils then took the audience through their sustainability work and key projects. This ended with a focus on Energy and the need to draw from experts in the energy industry. By networking, students hoped to create support structures to deliver first class case studies on renewable energy. This work would be published as part of the Comenius project and be an example of how partnership work could be driven and delivered through the leadership of young people.

Final speakers at the conference were teachers. Thomas Simpson and Roseleen Shanley outlined how the Re-thinking Energy Project linked to the Curriculum for Excellence. Bucksburn Academy had created its own model for community involvement in its projects and this aspect brought clarity to how schools could utilise the skills and knowledge within a community and transfer these to pupil leaders. The school also highlighted how a lifelong learning commitment to sustainability practices could be accomplished through the model. 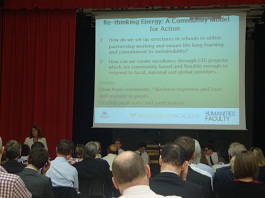 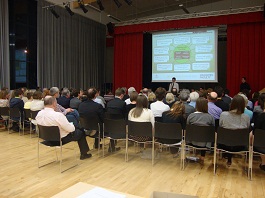 Many people present at the conference have written to the school and commented on the quality of the event. In particular, how impressed they were by the young people’s confidence and excellent organisation and delivery at the event. They were indeed an inspiration and Bucksburn Academy was extremely proud of its young people.

The Re-thinking Energy team is now expanding and it has been great to see so many more pupils coming forward to join the team. In particular, the presence of girls has been welcomed.  This has resulted in Rachel Brechin, Shona Doyle and Aimee MacDonald joining Ms Shanley on 3 May to attend a conference on “Women in Renewables” at the Scottish Parliament.

The school now awaits confirmation from the North Sea Commission to begin the Comenius project and deliver a project of excellence.

It was a busy March for Bucksburn Academy’s Sustainability Team.

On 14 March Ms Shanley, Ewan Bremnar and Alex Christides attended a United Nation’s (UNITAR) and Scottish Government Conference in Inverness. The event dealt with Education for a Low Carbon Future. Here members of the Re-thinking Energy Team listened to several key speakers and learned much about renewable energy technology. The highlight of the day was the workshop delivered by Dr Peter Dennis of the SEAM Centre. He took the team and other participants through the many renewable technologies on display and explained their pros and cons.

On 23 March Bucksburn Academy delivered two one hour workshops at a “Learner Voice and Pupil Participation” Conference in Edinburgh. This was organised by Education Scotland. Kieran Allen, Thomas Allen. Catherine Scally and Murray Thomson all spoke about the work done in their John Muir class. Participants at the conference applauded the pupils and were impressed by the work being done by the class. Details of this work can be found here.