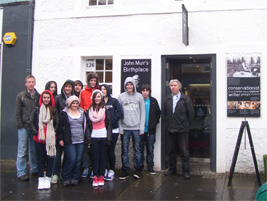 In the October holidays ten pupils, Miss Shanley and Mr Paton visited Edinburgh and The John Muir Museum in Dunbar. The group travelled by train and stayed at Edinburgh Central Youth Hostel for two nights.

The purpose of the visit was to find out more about John Muir, the famous Scottish environmentalist and understand why the John Muir Awards began in Scotland. The group also took the opportunity to do some sightseeing around our capital city where Edinburgh Castle and the Art Gallery were firm favourites.

The group spent a day in Dunbar. Here they visited the John Muir Museum which is situated in the house where John Muir was born. The pupils spent a few hours in the museum watching a video of his life, hearing a talk on his conservation work and examining the many displays of his life and work. The group were then led by museum staff and taken on a tour of Dunbar. Here they followed in the footsteps of John Muir and significant stories and places in his life were recalled. His love of nature developed from his exposure to many creatures and habitats around Dunbar. From this love of nature in his early life came his lifelong commitment to conservation, protecting nature. John Muir believed all humans need access to nature and wild places for their health and wellbeing. One of the highlights of the tour was a seal who came into Dunbar Harbour. We all got a close view of this tame creature who was as curious about us, as we were of him/her. 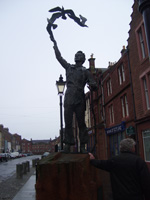 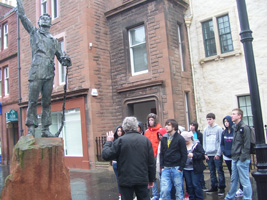 In the Youth Hostel the group socialised with many young people from other European countries who were visiting Edinburgh. They shared cultures and lifestyle stories as well as a few laughs and jokes.

The John Muir Class raised over £500 for their trip to Edinburgh and Dunbar by doing a sponsored walk along the Formartine and Buchan line. This is an old railway track which is now a walkway. They walked from Dyce to Newmachar and back on Sunday 2 October. The walk took 4 hours and there were opportunities to examine some of the plants and creatures along the route. The Environment Club funds paid for the train tickets to Edinburgh.

The trip was a great success and Mr Paton and Miss Shanley felt the group was a credit to the school.