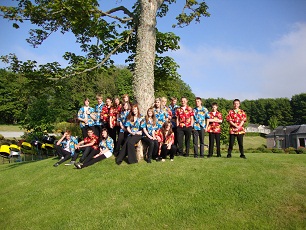 Bucksburn Academy’s steel pan band otherwise known as “Pandemic” is getting ready to hit the right notes at this year’s Notting Hill Carnival in London [Sunday 28 and Monday 29 August].

Throughout the summer the band has performed at various events to raise funds for their trip to the carnival which will include competing in the UK Panorama Steelband Championships on Saturday 27 August, also in Notting Hill.

The summer shows have been a great way for the band to practice its repertoire however a rehearsal at the school on Tuesday 16 August with Iman Pascall, a talented musician, composer and arranger specialising in steel pan music, is seen as a fantastic opportunity prior to the competition.

Born in Brooklyn, New York of Trinidadian heritage Iman started playing pan at four years old and has played in thirteen Panorama Championships in the UK, Antigua, New York and with Phase II, Desperadoes and Starlift in Trinidad.

Iman is in the UK working with CultureMix Arts and is assisting the Reading All Steel Percussion Orchestra (RASPO) who will also compete in the national steelband competition.

Bucksburn Academy music teacher Miss Robertson said: “The pupils have been working really hard throughout the year to raise funds for their trip to Panorama and the Notting Hill Carnival but because of the nature of our group – it’s been good fun with lots of performances around the city.

“Taking part in the Notting Hill Carnival will be quite an experience which the pupils and staff are really looking forward to.”

A short clip from Stv News is available from the following link: http://www.youtube.com/watch?v=7SvIxp5jk6I

Welcome to the Music Department