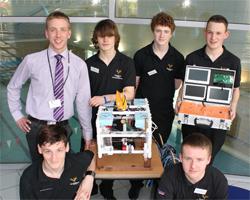 On 20th April 2011 the Bucksburn Aquablazers Subsea ROV team competed in the MATE Scotland ROV challenge. The team were set the challenge to design, build and operate an underwater Remotely Operated Vehicle (ROV) capable of performing the type of tasks ROVs actually performed after the recent Gulf of Mexico oil spill.

Ross McDonald, Stuart Green, Struan Henderson, David Adams and Ryan Cadenhead represented the school, pitting their engineering skills against other Scottish schools for the top prize of proceeding to the international final in Houston, Texas.

In 2010 Bucksburn competed in the international final in Hawaii and were keen to perform well again this year. After a hard fought competition Bucksburn continued their excellent track record in the competition by achieving 2nd place, along with a £300 cheque for the school’s young engineers club.