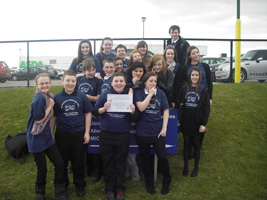 A team of 21 second year French students has won first prize in a French Drama Competition, Rencontres ThÃ©Ã¢trales, organised by the Institut FranÃ§ais dâ€™Ecosse and hosted by on Wednesday 23rd March.

Over a number of weeks the pupils pulled together to produce a play in French with groups taking responsibility for acting, costumes, sets, music, lighting and publicity. Judges enjoyed the colourful, lively and entertaining performance and praised the pupils for their clear and well rehearsed delivery in French.

Prizes, certificates and t-shirts were awarded to the pupils by the Institut FranÃ§ais who were sponsored by Total E&P UK Limited.

Congratulations to all the pupils for this achievement and for taking their French beyond the classroom. Our sincere thanks go to Ms Milroy in the Drama department who collaborated with us on this project and to various members of staff who gave their support and encouragement.