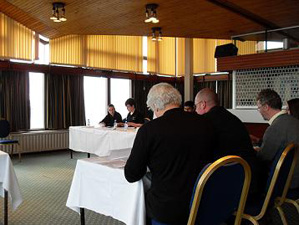 Eight teams from secondary schools in Aberdeen and Aberdeenshire were invited to demonstrate their ability to debate at the Europe Direct Schools debating competition on Wednesday 16th March at Aberdeen’s Beach Ballroom.

This is the fourth annual debate organised by Europe Direct Aberdeen that aims to encourage pupil understanding of European issues and how they impact on the everyday life of citizens.

Two fourth year pupils headed up the team from Bucksburn Academy to debate European topics using the British Parliamentary-style of debating. They competed against teams from Banchory Academy, Cults Academy and Robert Gordon’s College. This year’s debate was judged by:

The boys from Bucksburn did themselves and the school proud. They managed to get into the finals on the day and came 3rd overall. Well done boys!