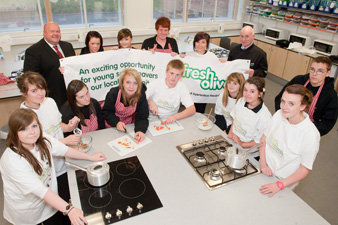 On the 20th of September 2010, Entier, the Aberdeen based catering and hotel support services company officially launches its pioneering apprenticeship competition that will create future management opportunities for some of the city’s school leavers. Congratulations to Steven Milne, Neil Tough and Natasha Lefka who have been picked to go through to the next round of the competition!

The Fresh Olives Apprenticeship competition has attracted more than 70 pupils aged between 15-16 from across four of Aberdeen’s schools and in the next seven months, aspiring hospitality and events managers and cooks will have to compete against each other to win one of two prestigious three year apprenticeships.

This is the first apprenticeship competition of its kind designed by a local catering and support services company to specifically appeal to school leavers and is being backed by the Scottish Government’s business to education programme. It will be judged by renowned foodie and former chairman and fellow of Masterchefs George McIvor, together with Entier’s managing director Peter Bruce and the company’s executive development chef Mark Donovan.

Said Peter Bruce: “I am looking for the most talented people to join the business. Whilst we may only be two years old we have a growing and dynamic workforce of 250 people. As an award winning business we have great ambitions and to meet those we have to ensure that we recruit the best people.”

There will be nearly 1500 school leavers from the city’s schools in 2011 and many will want to start their working lives straight away. With the dramatic demise of traditional apprenticeship schemes we felt that it was important to create something quite unique that would be aspirational and achievable for young people in the region.

Commenting on his own career path, Peter said: “At the age of 21 I was an offshore chef manager. This was a great personal achievement at such a young age and I believe that with the right attitude, determination and passion, we will be able to find those talented, young individuals who can accomplish the same achievements and perhaps more. I have great hopes for the individuals taking part and I’ll be very excited to find and then support the careers of Entier’s future managers”.

Guest judge George McIvor said; “This is a golden opportunity for two individuals. The Fresh Olives programme demonstrates how business can work very closely with the educational environment but more importantly offer something of great value not only to the eventual winners but to each of those 70 competitors. They will have the opportunity to really appreciate what a business such as Entier is looking for in its future employees knowing at the same time that a real career opportunity awaits them.â”

The Fresh Olives competition format was recently rolled out to the four schools, including Bucksburn Academy, Dyce Academy, Hazlehead Academy, and St Machar Academy. An introductory session to the competition has already taken place and in November the competitors will be invited to attend a practical assessment based around planning and timing; this will be followed by a number of practical cooking assessments before the numbers are reduced to eight in April 2011 where a final cook off will help determine the apprenticeship Fresh Olives winners.